How one utensil provides a safer option to inmates and COs

The EcoSecurity Utensil may be one small change inside a facility, but it can have a big effect on safety, health and the environment. Whether it’s ensuring officer safety, inmate compliance or the smooth operation of a jail or prison, administrators have a lot on their hands.

That means simple solutions can have a large impact. Enter the EcoSecurity Utensil (ESU), a safer, non-weaponizable alternative to traditional silverware. The utensil dramatically reduces incidents of self harm and harm to others, as well as assisting with inmate morale CO safety and cost reduction.

The creation of the ESU was a fortuitous accident, according to Peggy Cross, founder and CEO of EcoTensil.
Before the ESU was created, Cross was working on a paperboard utensil (think coffee cup) that attached onto a yogurt cup. She was working with a printer in development of the product.
The California Department of Corrections and Rehabilitation (CDCR) happened to contact the same printer regarding production of an ice cream tab lid, which they used for an all-purpose utensil in the prisons. The tabs were no longer available from their original, East Coast supplier.
When the printer saw the perfect synergy between the two products, they put the CDCR in touch with Cross.
“Once we started working with CDCR, we all realized it was a perfect solution to a real prison industry need,” she said. “They were looking for an alternative to plastic utensils made from a material that could not be sharpened and used for self-harm. The material needed to be food grade and FDA approved.”
And so the EcoSecurity Utensil (ESU) came to be.
The result was a utensil made of slick paperboard similar to that of a milk carton. It folds to create a sturdy yet simple structure, that lets inmates slice through most food items, such as a tamale or eggs, but not skin.
It even has a perforation across the handle, which allows the product to break down more quickly if swallowed or flushed.

The biggest fear with plastic utensils is the potential for inmates to turn them into deadly weapons used against officers, other inmates or themselves. The ESU’s novel use of paperboard renders it virtually non-weaponizable, Cross said.
“In 5 years and across 48 states with tens of millions sold to prisons, we have had not one report of an ESU causing harm to another person,” she said.
EcoSecurity Utensil National Account Manager Mary Shrive said the design is focused around protecting the safety of inmates and the COs working at a facility.
“That was an important aspect of the product for us,” she said.
Because ESUs helps prevent costly incidents, it stands to help save your facility money and time while increasing safety.
“When ESU prevents just one small incident, it pays for itself for years” Shrive added.

Those not incarcerated may think little of eating pizza with their hands. But try being in segregated or suicide watch and only eating with your fingers for every meal.
Shrive noted the company has met with several top correctional psychiatrists who confirm eating with fingers can have a degrading effect leading to low morale, unrest and combative behavior. This can include self harm, riots, hunger strikes and other disruptive behavior.
“By offering a paperboard spoon alternative to fingers-only menus, facilities can potentially increase morale among their at risk inmates,” she said, particularly for those with mental heath issues or on suicide watch.
She said the ESU can help reduce lawsuits stemming from “inhumane treatment.” The paperboard utensils are not considered punitive as EcoTensil products are used commercially across the U.S. for food sampling at stores such as Whole Foods and Sam’s Club.

As many facilities are being encouraged to “go greener,” the ESU helps institutions to meet sustainability goals.
ESU uses much less material than plastic, creating less waste. It is compostable and recyclable at waste processing facilities that accept milk cartons, and is made from renewable resources.
EcoSecurity Utensils are an environmentally friendly option that can help prevent inmate attack incidents. It stands to help save your facility money and time while increasing safety.
To learn more about the EcoSecurity Utensil, and learn who is using them in your state, CONTACT US.

Like most law-abiding citizens, Peggy Cross never expected to find herself in a penitentiary—let alone a prison riot. But there she was last May, looking on as inmates began taking hostages and guards moved in with shields, Tasers, and pepper spray. 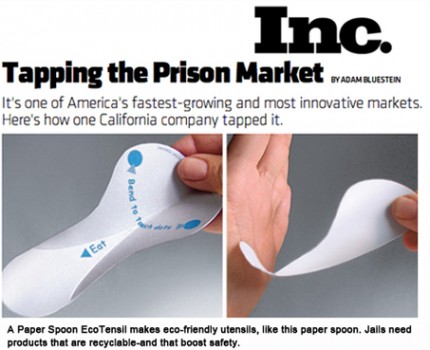 Fortunately, the melee that Cross, an entrepreneur from Larkspur, California, witnessed was a role-playing exercise, part of a four-day training session sponsored by the U.S. Department of Justice and held each spring at the decommissioned West Virginia Penitentiary. The event is designed to let corrections professionals evaluate their skills and equipment in realistic training scenarios. Cross was one of about 100 business people—purveyors of things such as smoke bombs, protective gear, and high-tech surveillance systems—on hand to promote and demonstrate their wares.

Cross was something of an outlier. Her company, EcoTensil, makes environmentally friendly cutlery. But much to Cross’s surprise, the prison system now accounts for a full 25 percent of her sales. In fact, the prison industry relies on all kinds of businesses to help address its long-standing needs for security and sanitation, as well as emerging challenges, including an increasing focus on sustainability and the health of inmates. Like the military, the corrections system is a big, well-capitalized customer: According to the latest figures from the Department of Justice, nearly 2.3 million Americans are in prisons or jails, with states and the federal government spending $74 billion annually to keep those facilities running.

When Cross launched EcoTensil, in 2010, her goal was to make the experience of eating yogurt and other single-serve food items a little greener. The company’s first product, SpoonLidz, is what it sounds like—a container lid made of coated paperboard that, with a strategic fold, turns into an eco-friendly spoon. Cross was having a prototype made at a print shop in Sacramento when an employee of nearby Folsom State Prison came in and mentioned he was looking for utensils to be used by dangerous inmates. When the printer showed him Cross’s product, he knew it was just what he needed. Paperboard, after all, is not just a green alternative to plastic; it’s also a safer one, because it can’t be turned into a weapon.

This was not exactly part of Cross’s business plan. But she jumped at the opportunity and produced the EcoSecurity Utensil, or ESU, which she sells to Folsom and other prisons and mental-health facilities nationwide. She has been surprised at how easy such deals have been to close. “One of the nice things about this market is that people in prisons are looking to solve a problem,” Cross says. “They Google safer utensils. They find us.” Attending events like the mock prison riot and the annual convention of the American Correctional Association has also helped. (Among the lessons Cross has learned: “Don’t wear high heels to a corrections industry convention; you will be the only one.”)

What are prisons looking for? Whether they are buying clothing, bedding, toiletries, or food-service supplies and equipment, prisons want products that increase security—that can’t be turned into weapons, for example, or used to hide contraband, says Mike Reed, director of marketing for the Bob Barker Company, a large supplier to the prison industry. (No relation to the famed game-show host.) Among the items in Barker’s print and online catalogs: flexible foam toothbrushes, transparent toothpaste tubes, see-through electronics, clear-soled shoes—and, as of January, Cross’s paperboard cutlery. The facilities, Reed adds, are also on the lookout for products that help minimize waste and keep facilities cleaner and prisoners healthier.

Indeed, the corrections industry is becoming an unlikely leader in sustainability, thanks in part to Executive Mandate 13514, which directs federal facilities, including prisons, to reduce energy use and waste. That has helped Excel Dryer, an East Longmeadow, Massachusetts–based manufacturer of electric hand dryers, whose customers include restaurant chains and schools as well as prisons. Not only are the dryers far cheaper than towels, says Excel’s vice president of marketing, William Gagnon, they also eliminate paper waste, which is the largest single contributor to prison waste streams. Paper also can be used by prisoners to clog toilets or start fires. Prisons, says Gagnon, can be a key testing ground. “In a corrections facility, you’re really putting things to the test,” he says. “All our customers benefit from us finding and fixing problems in these facilities.”

Cross, for her part, is now exploring ways to apply her expertise in sustainable packaging to address other prison pain points—such as combs and dustbins made of “nonweaponizable” rigid paperboard instead of plastic. “As a designer, I’m excited about the opportunity to see what I can do with paperboard,” she says. “There’s an incredible future in this.”

For smaller companies in particular, the prison market can present some logistical challenges. Sales tend to spike when a new facility opens or there’s a sudden influx of inmates. “We need suppliers that can react fairly quickly,” Reed says. Prison purchasing policies run the gamut: Though many states and some private prison-management companies have centralized buying, most county facilities have their own purchasing departments. The procurement process varies from state to state—some require multiple bids on every product or disallow online orders and payment with credit cards.

Cross has heard it said that a socially responsible company has no business working with prisons—profiting from the fact that 1 percent of Americans live behind bars. But she has no qualms. “I’m very happy to offer a product that increases safety for guards and inmates,” she says. “Corrections is an important and necessary industry, and a lot of people in it risk life and limb to keep the rest of us safe. I would venture to say that those who have awareness of the importance of environmental responsibility also have awareness that humane treatment and safety for all humans is of value, regardless of which side of a set of bars they are on.”

How one utensil provides a safer option to inmates and COs 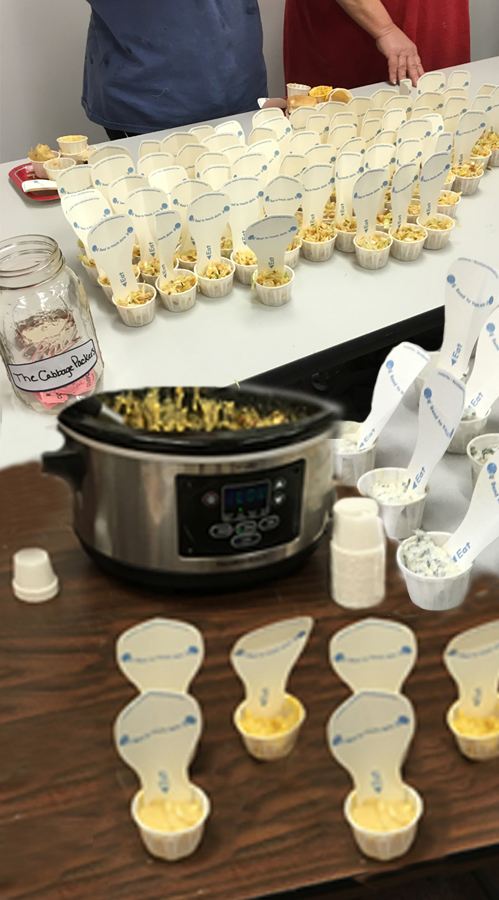